Raja Ampat was introduced to the National Geographic magazine in 2007 as one of the most hot places in the world, which was introduced as “a miraculous sea full of countless life is in Indonesia”.
This ocean is to be known to divers begins with the adventurer who came to search for a relic of war from the Netherlands in 1990 diving into this sea and being impressed with its wonderfulness and opening diving service. Later, in 1998, when he introduced the Australian-based fish scholar Dr. Gerald (Gary) Allen to this sea, he was also impressed and understood the sea’s specialty, worked on CI (Conservation International) , and then CI started researching Raja Ampat
In this investigation, 970 fishes and more than 450 reef corals were found and in the following 2006 investigation, about 1,300 fishes, 600 corals (9 of them were the world’s first), 700 species of mollusks were found. After that it was introduced to the National Geographic magazine.
Even now CI still continue to investigate in Raja Ampat it is a place called a treasure trove of living creatures where new species are found one after another.

Bird of paradise is said to inhabit the tropic area around Australia, especially many endemic species live in New Guinea Island, male birds have beautiful wings, they spread their wings and dance in breeding season. This bird was captured in this area during age of discovery (16th century), and these birds were taken off with their legs cut off, so this bird is flying in the wind for the whole lifetime, it is thought that it is a bird of paradise. Now it is a part of this Raja Ampat that you can easily see wild bird of paradise, and you can see it with about 90% on watching bird tour start from early morning for two hours. 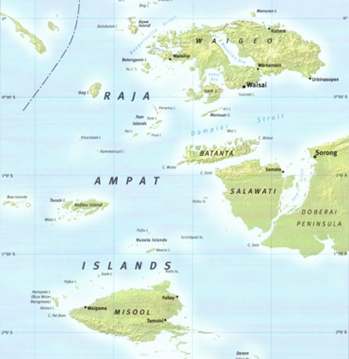 This area consists of four main Islands near the equator, Misool , Salawati, Batanta , Waigeo.
From the tradition that the king governed these four islands long ago, it became known as “islands where the four kings rule” (Indonesian: Raja = king, Ampat = 4).

Why praised from scholars

Why Raja Ampat is admired by scholars, there is a reason for the formation of this ocean.
It is because the three plates (Eurasia, Australia, Pacific plate) overlap in this area due to the effect of continental drift on geological age. Also, the difference of nutrients such as plankton makes the aquatic species rich. In addition to that, the change of sea level due to the ice age which also freezes the equator made the isolated sea, and the aquatic creatures trapped in that place have achieved their own evolution (endemic species).

Raja Ampat said to be the ocean of life, this ocean is still unknown how many species of aquatic creatures are. Today, CI (Conservation International) and WWF (World Wildlife Fund) make Raja Ampat a marine protected area under the support of the government and continue to investigate with biologists such as WWF and CI.

In Raja Ampat where praised by fish scholars and biologists, unique aquatic species are still found. Among them, the walking shark “Raja Epaulet Shark (known as Walking Shark)” made the fish scholar surprised. . This shark has a unique characteristic using their pectoral fins for moving forward, it seems like walking underwater, it is reason called walking shark. Raja Epaulet Shark which walks with pectoral fins is very lovely and popular. Also, it is one of the reasons that there are many creatures (endemic species) that can only be seen here in Raja Ampat such as “Eviota Raja” (Apogonidae) and “Batanta Dottyback” (Pseudochromidae).

The “Kabui Strait (common name: Passage)” with its unique landscape is in between Waigeo Island and Gam Island, the narrow strait like a river is where the direction and intensity of current will change due to the tides. However, the underwater landscape that this environment creates is a fantastic world that can not be experienced elsewhere. 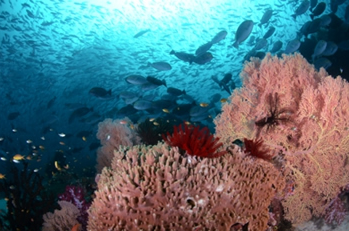 Raja Ampat is an area in which the three plates of Australia, Eurasia, and the Pacific overlap, and there are many kinds of coral there. It is said that there are about 800 kinds of coral all over the world, and you can see two-thirds of that coral. In addition, it continues to be found a new kind of coral. 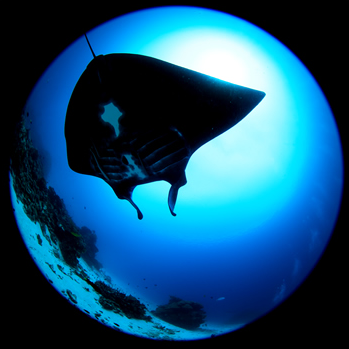 At the Manta area in Raja Ampat, big Manta ray gathers a lot, you can see black Manta with probability of almost 100%. Currently there are several Manta ray dive sites, such as cleaning area and feeding area, sometimes you can see oceanic Manta ray 6 m wide.

Australian fish scholar Dr.Gerald Allen said, “I am intrigued that it is a very special ocean, I have found 283 kinds of fish in just one diving!” The biologist Mark Erdman said, “The habitat is wonderful anyway. The ocean of Raja Ampat is unspoiled from long ago!” As above Raja Ampat is wonderful area where you can see many and very interesting creatures.
Gallery
Click here

Booking from this form. We will get back to you after we confirm that.
※Required
DIVING CRUISE
Copyright 2015 Dive Dream Indonesia. All Rights Reserved.