It is an area (Komodo Islands) where about 100 large and small islands spread to about 2,500 ㎢ between Sumbawa island and Flores Island (near Flores Island side) about 500 km to the east from Bali island in Indonesia.
This area belongs to Indonesia’s tropical rain forest climate, but it is the only savanna climate (rain hardly in the dry season and little rainfall even in the rainy season) by the seasonal wind from Western Australia. This landscape is different from the others in Indonesia.
In addition, this Komodo Islands faces the Flores Ocean in the north and the Indian Ocean in the south, and the islands in the straits between them are biologically and ecologically distinctive.
About 2,200 ㎢ including ocean in Komodo Islands was registered as World Natural Heritage in 1991, nature, animals and plants in this area are strictly protected in National Park. 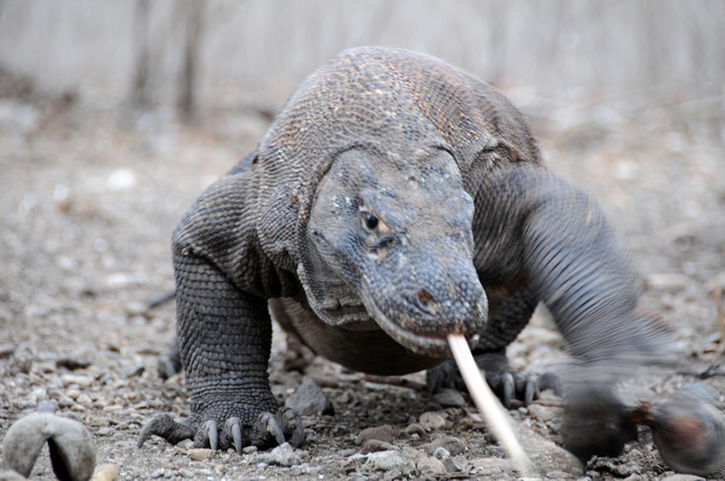 The Komodo dragon (Varanus komodoensis), also known as the Komodo monitor, is a large species of lizard found in the Indonesian islands. It is the largest living species of lizard, growing to a maximum length of 3m in rare cases and weighing up to approximately 130 kg.
We can see wild Komodo Dragon at only 4 Islands, 2,921dragons in Komodo Island, 3,238dragons in Rinca Island, 43dragons in Gili Motang Island and 99dragons in Nusa Kode Island, total amount is about 6,300 dragons (2013 search).
Komodo Dragon has been designated as endangered species by CITES and above 4 Islands are strictly protected with natural conditions. 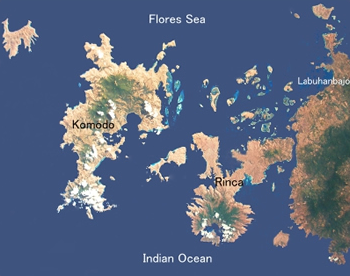 You can dive at varied underwater landscape in Komodo and it will not let you get bored. You can enjoy all the environments at underwater such as canyon, drop-off, pinnacle, reef, rocks, sandy, black sandy and mangrove area and also enjoy the difference of those the biological layer.
In particular, you can see rare endemic species (with the name of Komodo) during the trip.

North side in Komodo Islands faces to the Flores Ocean which has warm seawater and good visibility and South side in Komodo Islands faces to the Indian Ocean which has deep water with much nutrition. Komodo Islands are the area where these ocean are mixed at strait.
Therefore, Komodo ocean has a great influence on the development of aquatic creatures and it becomes the optimum habitat area for marine organisms by mixing warm seawater in the north and seawater with high nutrients in the south, and unrivaled It is a rich biological layer.

North side at Komodo Islands 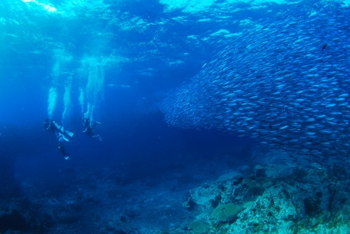 This area is the Flores Ocean with good visibility and warm seawater from the western Pacific Ocean. You can enjoy diving at the dynamic terrain and see dogtooth tuna, GT, blue fin trevally, bigeye trevally, rainbow runner, gray reef shark, napoleon fish, eagle ray, grate barracuda…
Especially, the scenes which GT hunt several fusilier are very impressive, if you are lucky, you can see these scenes and dolphins at early morning and the evening.

South side at Komodo Islands 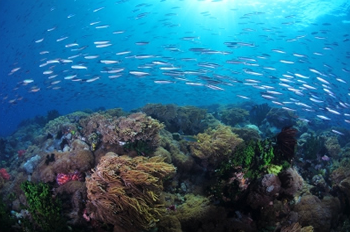 On the south side of the Komodo Islands, nutrient-rich seawater enters due to the influence of southeast trade wind and the upwelling occurring off the coast of Western Australia and you can see many aquatic creatures seeking high nutrient high seawater.
In addition to experiencing a totally different ocean from the north side, its wonderful colorful underwater world is also very photogenic and pretty place. (However, it is also the place where the visibility is not so good than north side and seawater temperature is little bit cold due to the influence of these conditions.)
We can see manta ray through a year and there are many chance to see black manta ray here in south side in Komodo Islands. 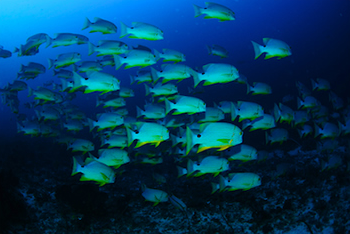 Every April, May and September, October around the new moon, you can dive to the area where you can see sailfin snapper. You also have chance to see whale shark, sunfish, whale, killer whale etc. depending on the season. 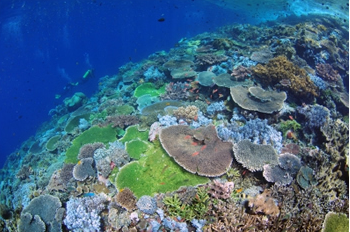 Central area where the warm seawater, good visibility from the north Komodo and the nutrient-rich cold seawater from the south Komodo are mixed together is a very ideal habitat for aquatic creatures.
Especially the hard and soft coral are so beautiful, and we can see various kinds of fish which make them as a hiding place, as well as many migratory fish hunting at them.

Every April, May and September, October around the new moon, you can dive to the area where you can see sailfin snapper. You also have chance to see whale shark, sunfish, whale, killer whale etc. depending on the season.

①：The north area is the Flores Ocean with good visibility and warm seawater from the western Pacific Ocean. You can enjoy school fish and migratory fish.
②：2 The south area is the Indian Ocean with nutrient-rich seawater enters due to the influence of southeast trade wind and the upwelling occurring off the coast of Western Australia. You can see the many interesting benthos creatures there.
③：he central area is the richness place of biological layer where north area and south area are mixed. As above central area is the very interesting place where you can enjoy different condition. Here is also the area where the Komodo Dragon (endangered species) live and you visit to Pink Beach made of coral.
Gallery
Click here

Booking from this form. We will get back to you after we confirm that.
※Required